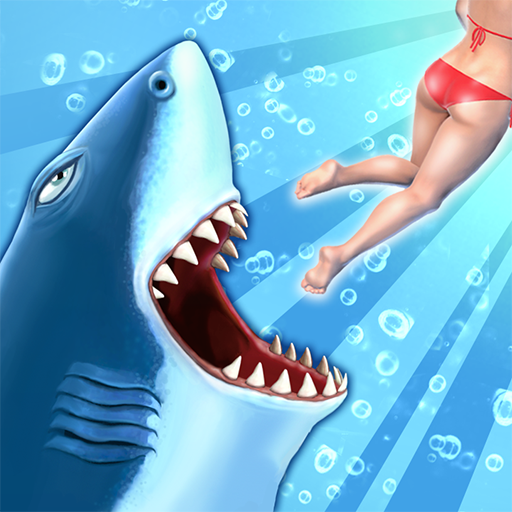 Hungry Shark Evolution is the Official game for Shark Week - live every week like it's Shark Week! Download now free.

Get ready to enjoy the best animal game, You can even play offline! Stop looking for 3d games, this action shark simulator is for you! Are you ready to have lots of fun?

Take control of a very Hungry Shark (not a mammal, but a fish) and go on a frantic ocean rampage, surviving as long as possible by eating everything and everyone in your way! Explore a beautiful underwater world and evolve iconic sharks like the Great White and Megalodon! The monster has been unleashed… and it has monstrous 3D jaws to bite. Forget about other games, this is so cool!

In this action-packed aquatic animal adventure game you can:
• Swim like a shark, jump like a shark, eat like a shark… And have fun!
• Unlock more than a dozen unique sharks and other fintastic creatures. Become a Megalodon or a Great White!
• Explore an open world both above and below the waves
• Enjoy jawsome 3D graphics and sound effects
• Discover and devour mysterious creatures of the deep, like blue whales, and the surface, like birds or… You know.
• Recruit Baby Sharks to boost your predatory powers
• Equip awesome top accessories like Lasers, Jetpacks and Top Hats! Isn’t it cool?
• Find and collect sunken Bonus Objects
• Sink your teeth into loads of challenging missions
• Activate Gold Rush to survive longer and score higher
• Take part in regular in-game events and win limited edition prizes
• Attack / bite with intuitive touch or tilt controls
• Play offline wherever you are – no Wi-Fi, Internet connection or data needed! Action is everywhere
• Synchronize your game easily across Android devices

The best and hungriest game of them all is back to rule the oceans!
Have fun and dive into a beautiful 3D aquatic adventure! Experience life as a shark chowing down on fantastic sea creatures, from the bottom of the shark food chain to massive predators that defy extinction!

Game overview:
• Reclaim the ocean as a very Hungry Shark: Take control of a very Hungry Shark in this aquatic 3D action adventure. Evolve and survive as long as possible by eating everything and everyone in your path
• Unlike other games, here you have more than 12 sharks to upgrade: Grow and evolve your creature to be bigger and better. Level up with 3 attributes that increase as you go
• Rise to the challenge: Compete on the leaderboards. Try to beat the high scores of your rivals from around the world
• They’re going to need a bigger boat: Fight for survival against huge bosses and other dangers of the deep. Shark finners, toxic waste, rocket firing submarines and even a friggin’ Giant Crab!
• Gotta get them all! Each shark has a set of missions to master, as well as hidden objects to find dotted around the map
• No Internet connection? No problem, you can play offline, no Wi-Fi needed

Hungry Shark Evolution contains In-App Purchases which allow you to buy Gem and Coin currency which can be spent on upgrades and accessories. Gems and Coins can also be collected in game without requiring purchase, or by watching video advertisements from the Treasure screen.
The game contains advertising.
Advertising is disabled if you make any purchase in the game.

Forget about other offline animal 3D free games. This is the best simulator. Are you having fun? Have you fed the monster? Be careful, the Megalodon bites… But it’s cool! Evolve the ultimate predator.