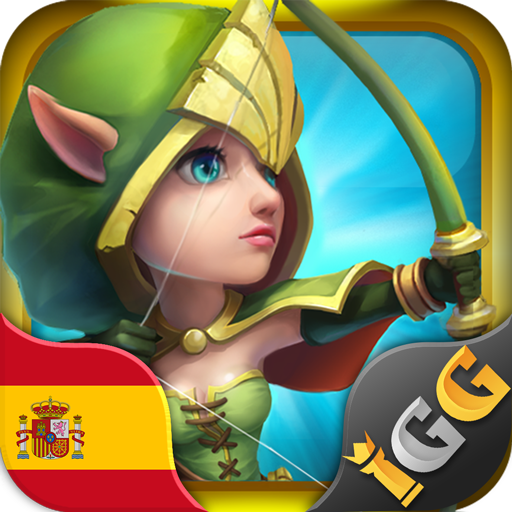 Publisher: IGG.COM
Number of Apps: 88, including

🇪🇸 🇪🇸 This is the optimized version of Castle Clash in Spanish. For a better user experience, we recommend you to download the English version of the game through the following link:
https://play.google.com/store/apps/details?id=com.igg.castleclash&referrer=utm_source%3DES%26utm_campaign%3DEN

●●● Assemble your troops for an epic MMORPG combat! ●●●

With more than 100 million players around the world, Castle Clash is a game of epic proportions! Recruit Warriors and legendary heroes for your knight armies and fight to become the mightiest warlord of this empire! Conquest the rival king castle, test your combat strategy in a dungeon or battle against powerful swordsmen, elves and also dragons in this RPG with PvP mode.

Join this epic combat now! Plan the defense for the Civilization of a medieval empire against the enemy invasion or jump into war on the side of a clan fighting for invading and the conquest of a kingdom. Build an impenetrable castle to defend your empire or use the best strategy to attack and invade the village of an enemy knight. Customize your weapons, armour and fortress in this MMORPG multiplayer role-playing PvP or PvE game.

Conquer a castle and build a village to get resources and improve your forces for the battle. Create the best fortress to protect the castle. Plan the batlle strategy to defend the empire and send your troops to invade and conquest kingdoms from other civilizations. Become the king of this medieval battle realm. Train your armies for attacking and defending and upgrade your forces for confrontations in dungeons. Play solo or in co-op beside your friends in this MMORPG campaign. Forge a powerful empire realm alliance and fight against enemy hordes along your best squad.

If you like castle games, play Castle Clash now: The fortress castle empire game along role-playing players worldwide. Collect the best heroes, upgrade their skills and plan the strategy to become the legendary king of this MMO empire in war!

Features of this MMORPG game:
* Build an impenetrable medieval castle to defend and conquest the kingdom!
* Are you an empire knight, a clan summoner or a guardian paladin for the war realm? You choose!
* Hit the mythical dragons with armies full of troops of archers and mages!
* Collect gems and customize your legendary heroes, from elves and dwarfs to orcs and ogres!
* Join your favorite heroes for a new championship: magicians, warriors, bowmen…
* MMORPG: join your friends and clashers from all over the world to combat and attack in the battlefield against powerful swordsmen!
* Combat in the alliance wars and the fortress battle clash!
* Better co-op and PvP modes than any other RPG strategy game!

Battle against enemy kingdoms and conquest territories without forgetting the defense strategy for your own castle. Manage the clan resources from your village and upgrade the gear of your warrior troops. ¡Remember to turn your castle in an impenetrable fortress!

Get ready to live the best role-playing action and medieval war MMORPG. Assemble your armies, dominate magic, prepare your castle and conquest the empire to rule a whole civilization and to destroy your enemy. Your knight forces await. ¿Ready for the ultimate kingdom clash?

Based on 596K ratings